Enrichment analysis (also known as functional enrichment) is an helpful technique for high-throughput data interpretation. Given a list of genes resulting from an experiment, enrichment analysis enables to identify functional categories that are over-represented. Such functional categories are typically derived from functional annotations (such as the Gene Ontology), or from pathway databases (such as KEGG), or other resources (such as the collection of disease signatures in MSig DB, or protein complexes in MIPS).

However, enrichment results are often characterized by lots of redundancy and inter-dependencies between gene-sets representing functional categories. For instance, Response to radiation, DNA Integrity Checkpoint and p53 Pathway have all several genes in common. Since the typical enrichment analysis can output up to 300 hundred different gene-sets, some form of organization is required to navigate results. The Gene Ontology has its own hierarchical structure, but what about other resources?

To address this, we organize gene-sets into a network, called enrichment map. Two gene-sets are connected in the enrichment map if they have a high overlap, i.e. if they share many genes. Applying automatic layout techniques, groups of inter-related gene-sets tend to cluster together, providing for a much easier and intuitive visualization.

In this example, we analyzed a microarray experiment studying MCF7 breast cancer response to estrogen. Cell were cultured with or without estrogen and then sampled at 12 and 24 hours. Gene differentiality was assessed for the two time-points separately using the t-test. Gene Ontology terms were tested using GSEA.

In the enrichment map, the two time-points are mapped as follows:

This is the plugin output: 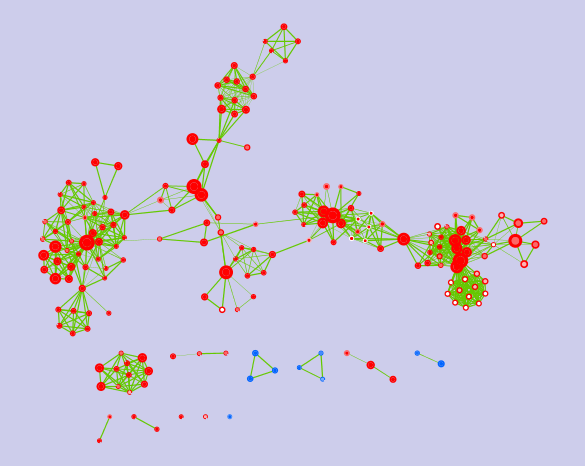 After some manual editing, to refine the map layout and to tag the clusters, this is the final picture: 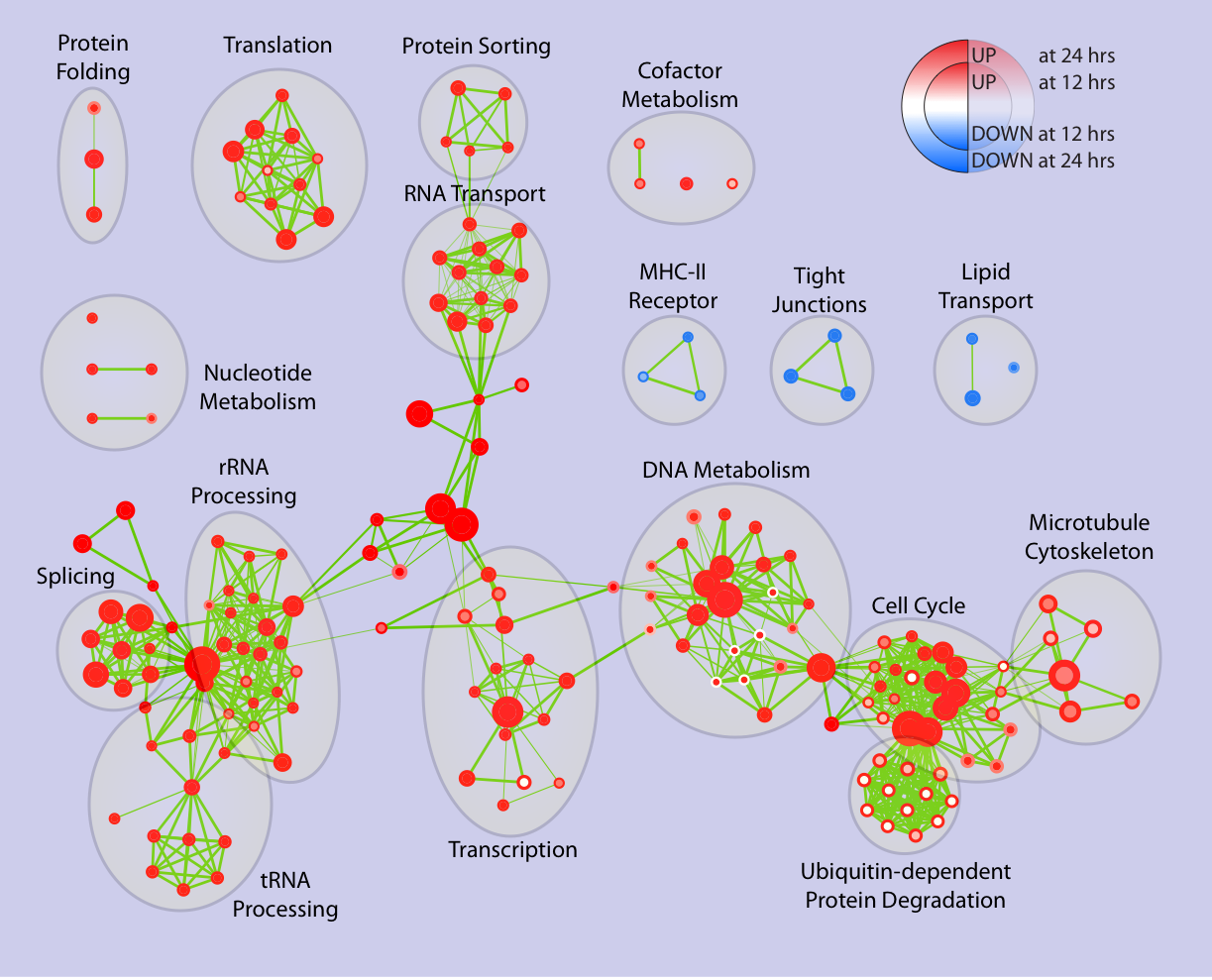 In accordance with the role of estrogens for breast cancer, we found major clusters relating to growth and proliferation upregulated:

This is what we see when we zoom onto a map cluster: 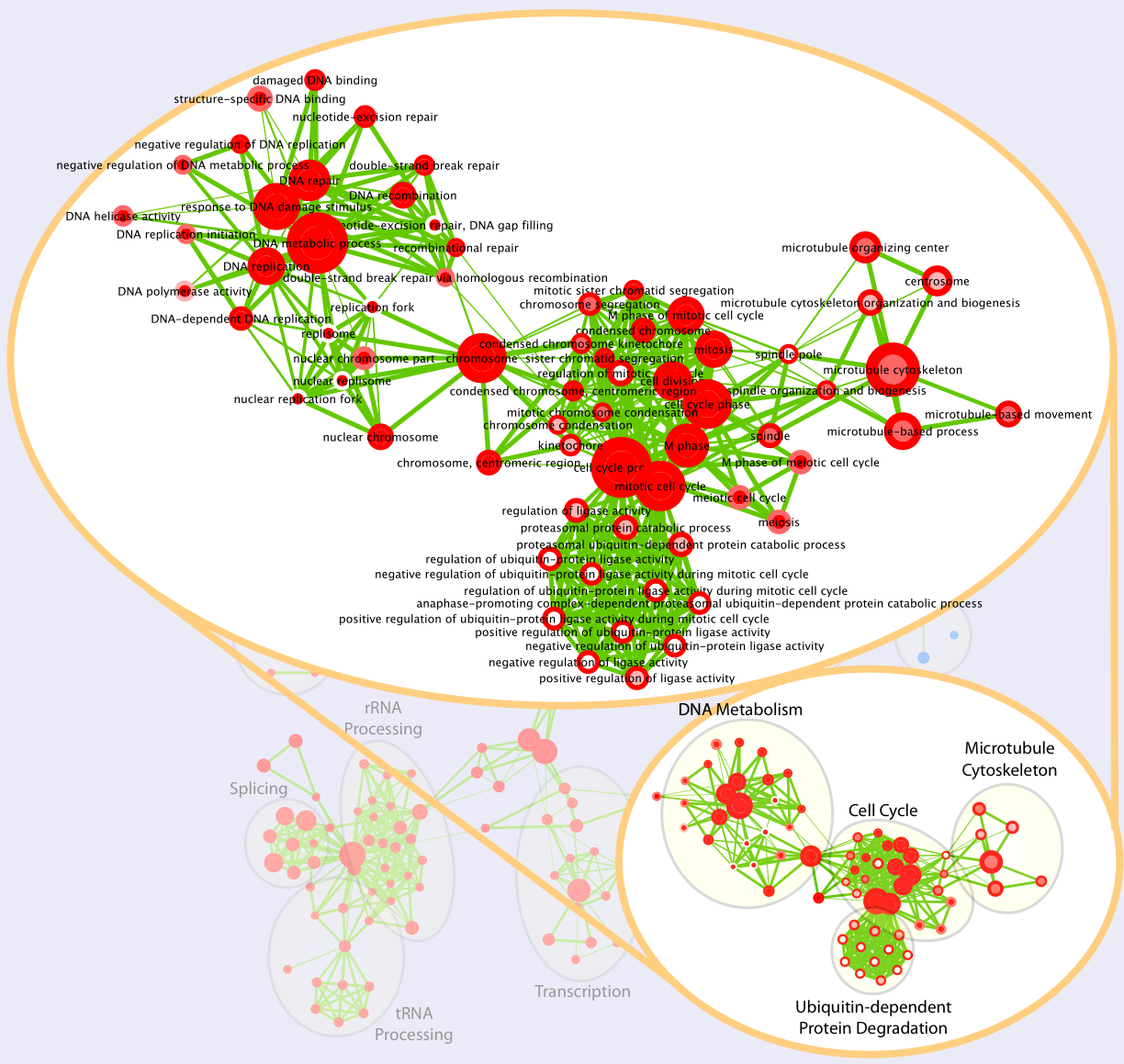 For detailed instruction on uploading this data-set, please go to this tutorial page.